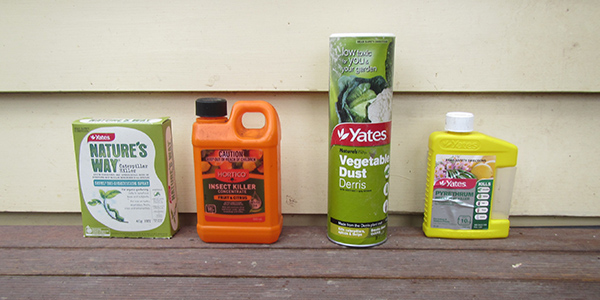 This page is part of the “DEFEND” section of the Three Ds Pest Control program, which is a gradual three stage approach to protect vegetables from pests that is designed to minimise the use of pesticides.  DEFEND is when you actively kill pests attacking your plants, but only with environmentally friendly methods and only after DETER methods have failed.  For an overview of the Three Ds Pest Control program click HERE.

Note that only pesticides and control methods that I use or have used in the past are listed on this page.  As such it represents only a small proportion of the insect pesticides that are available.

The active ingredient in Derris dust is Rotenone, a natural compound that is found in several tropical and subtropical plants in Central and South America.  It is effective against cabbage butterfly and I use it on Brassica seedlings when growing in seedling boxes and when first planted in the ground. However, it is water soluble, so it is best not to use it if rain is expected.

While considered an organic insecticide it is a broad-spectrum insect killer.  Meaning that it will kill a wide range of insects, not just the ones eating your vegetables.  As such should only be used sparingly.

Pyrethrum is a natural insecticide that comes from the Chrysanthemum daisy. It is effective against a wide range of insects and, in lower doses, will act as an insect repellent. I have found it effective at killing aphid and whitefly infestations.  While considered an organic insecticide it is a broad-spectrum insect killer.  Meaning that it will kill a wide range of insects, not just the ones eating your vegetables.  And as such should only be used sparingly 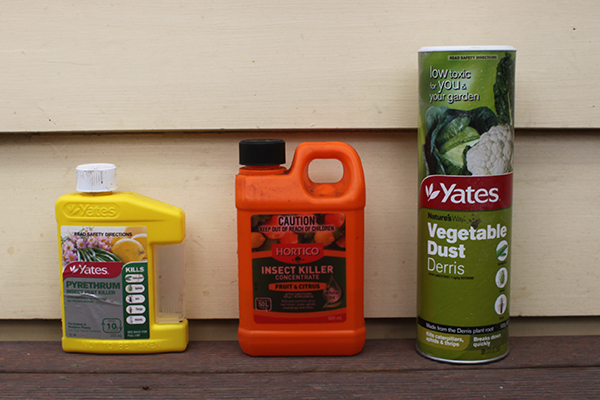 LEFT: Pyrethrum.   CENTRE: White Oil.  RIGHT: Derris Dust.  All are what are considered organic pesticides.  But note that they are also broad spectrum-insect killers, meaning that they are toxic to a wide range of insects including ones beneficial to your garden such as lacewings and ladybirds.

White Oil works by blocking the breathing pores of insects, causing suffocation and death.  I mainly use it to kill scale on citrus trees. The active ingredient is petroleum oil, though you can make up your own white oil using sunflower oil and detergent, though note that I have never made it myself.

While white oil is effective at killing adult scale it is less effective at killing juvenile scale and ants.  When it comes to killing scale it is also important to kill any ants on the tree the scale is on as ants farm scale to collect the honeydew that they produce.  To maximise honeydew production the ants actively protect the scale from predictors and move juvenile scale form one tree to another.

To make it up mix both the recommended dose (if will vary depending on the how concentrated each product is) for the White Oil and Pyrethrum in the same amount of water and spray as per directions. 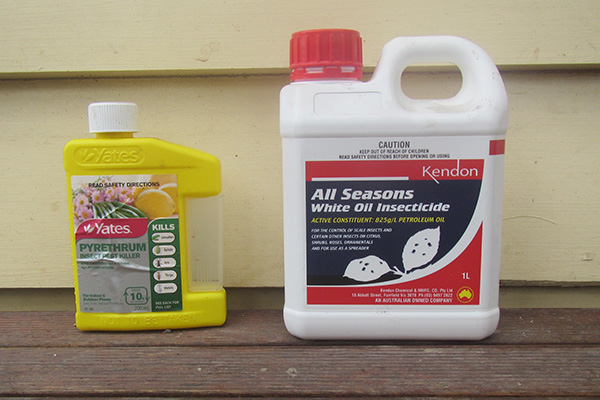 Used in combination Pyrethrum and White Oil is highly effective controlling scale on citrus trees.  It is also effective against cherry slugs on cherry and pear trees.

To apply tip some lime powder (commonly used by gardeners to reduce the acidy of soil) into a bucket.  Then take a garden trowel and flick small amounts of the lime over the tree so that it falls on the leaves as a light dust.  The powder desiccates the skin of the cherry slugs, causing them to shrivel and die.  You can also use sieved wood ash in place of lime.

Apply when the cherry slugs begin to become active in mid spring.  Repeat the dusting if there are still signs of cherry slugs, though normally one application is enough.

The downside of regularly dusting your trees with lime is that, as lime is alkali, it can raise the ph. of the soil below the trees.   These days I prefer to kill cherry slugs on my pear and cherry trees using a combination of  WHITE OIL AND PYRETHRUM.

While there are a range of caterpillars that this bacterium will attack, I use it mainly for killing cabbage butterfly, which specializes in attacking plants of the Brassica family (cabbage, cauliflower, broccoli etc…)  While it is slower acting then Derris dust it seems to last longer on the plants and leaves predatory insects unharmed to do their work.

In treating Brassica plants against cabbage butterflies I generally use Derris dust on the young seedlings in their seedling boxes and when they are first planted out. But once established in the garden I switch to Bacillus thuringiensis. The instructions on the Dipel packet say spray weekly, but I generally find that two sprayings are enough. 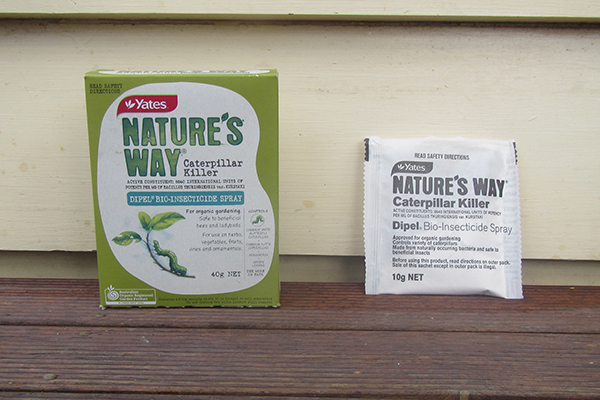 Bacillus thuringiensis is sold by Yates under the Dipel label (LEFT). It comes with four separate sachets (RIGHT), enough to supply a back yard gardener for several years.  The advantage of Dipel is that it is target specific, meaning that it only kills caterpillars that ingest the Bacillus thuringiensis bacteria.  It is harmless to all other insects, including beneficial insects such as lacewings and ladybeetles.