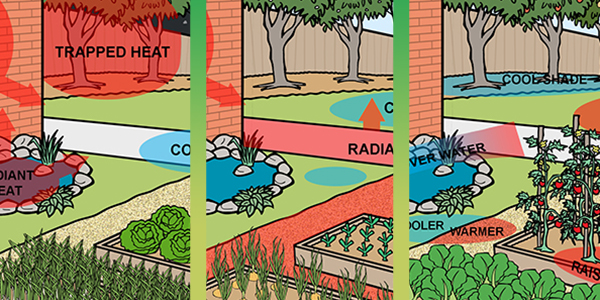 Garden microclimate refers to the unique mini climate that each garden has. The microclimate of a garden can vary significantly from gardens down the street or even next door.  This page explains how microclimate can impact a garden

factors that influence a garden's microclimate

THE DIRECTION THE BLOCK FACES
North (South in the Northern hemisphere) and West facing blocks can be much hotter, South facing blocks will generally be cooler as they are likely to be shaded more.

LARGE TREES
In summer large shady trees will make your garden much cooler than one without large trees.
In winter evergreen trees offer a measure of protection against frosts by trapping heat under their leaves on cold nights while deciduous trees (bare in winter) will allow more winter sun in to warm you garden during the daytime.

Without large trees a garden will be colder in winter and hotter in summer.

BUILDINGS
Buildings absorb heat during the day and slowly release it at night.  Frost is less likely to form in the immediate area surrounding a building due this heat being given off.  Buildings can also give off radiant heat in the form of fires for warmth or cooking food.

PERGOLAS
Pergolas create shade, cooling the area below them.  They can be enhanced by trailing climbing deciduous plants (such as grape vines) over them.  A deciduous climbing plant will offer extra shade in summer but allow sunlight to penetrate in winter when the plant has shed its leaves.

CONCRETE AND GRAVEL PATHS
These will be hotter than nearby lawn as they both absorb and reflect heat.  Raised beds surrounded by such paths will be warmer than if surrounded by grass ones.

Concrete and gravel paths also offer some protection against frost on cool nights as they absorb heat on sunny days and slowly release that heat during the night.

WIND BREAKS
Fences, hedges and buildings can act as effective windbreaks.  They reduce the windchill in cooler weather and cut the impact of hot dry winds in summer.

PONDS
Pond water absorbs heat during the day then slowly releases it at night.  The heat released on a cold night can be enough to prevent frost forming in the immediate area.  Ponds also have a cooling effect on hot days, warm winds blowing across a pond will be cooled due to evaporation.

RAISED VEGETABLE BEDS
Raised vegetable beds have warmer soil than ground-based beds as heat is absorbed via the sides of the raised bed as well as the top.  This is especially so for raised beds made of metal.

THE SLOPE OF THE GARDEN
On still cold winter nights hot air rises while cold air sinks.  If a garden has a slope then cold air will flow to the bottom of the block, which can create concentrations of frost (sometimes called frost sinks). 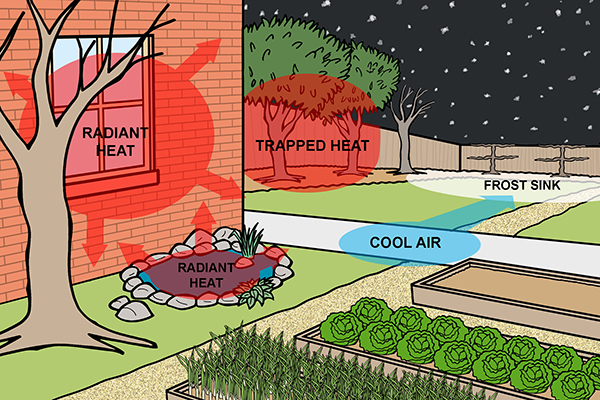 How a garden can be heated or cooled on a still winter’s night.

How a garden can be heated and cooled on a mild spring day. 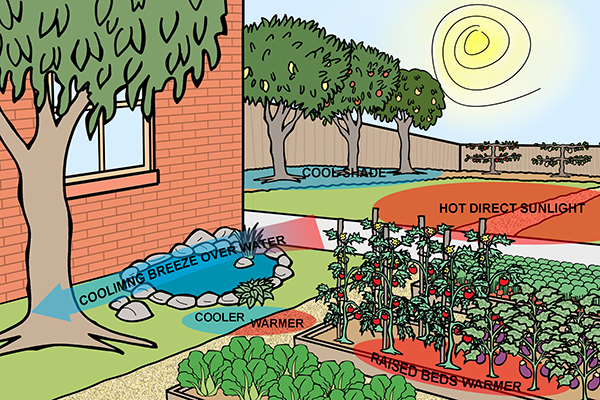 How a garden can be heated and cooled on a hot summer’s day.

altering the microclimate of a garden