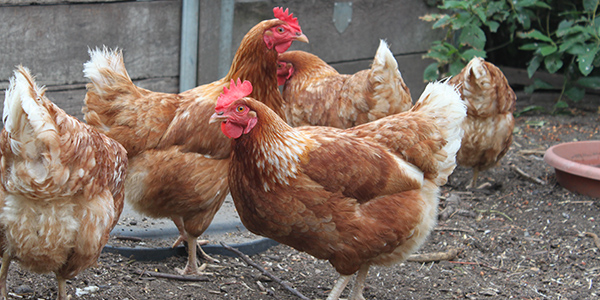 I manage my chickens as farm animals, which means that after they have reached the end of their useful laying life I kill them and replace them with new pullets.  Usually this has meant me keeping them for between two and three years.  While there is an observable drop in egg production as hens got older I never kept accurate records to determine just how rapidly egg production drops off.  Three years ago I set out to find out how rapidly egg production drops off by keeping a daily tally of eggs laid.  This is my report on the results.

How long do commercial egg producers keep their hens?

Commercial laying hens are moved to laying farms just before they start laying eggs, at around 16 weeks old. They are typically kept until 72 weeks old as this is the point when egg production and quality declines to a point that it is economically unviable to keep them.

I usually keep my hens for double that time as even in their third year they still produced enough eggs to justify the cost of the feed to keep them.

The hens I used for the experiment

For this experiment I used six Hyline hens.  Over a thirty-year period of keeping chickens I have kept pure bred Light Sussex Bantams, Barnevelders and Australorps.  I have also kept crossbreed Lohman Browns, ISA Browns and Hyline Browns.  While all these breeds have their merits I have found that the Hyline Brown to be the best overall as it combines excellent egg laying qualities with an extremely friendly temperament.

How the hens faired

The six hens were bought as twelve-week old’s and began laying eggs in January 2019 at sixteen weeks.  My initial plan was to keep the hens for four years but adverse circumstances forced me to cut short the experiment by a year.  Things went well until I lost one of the hens (cause of death unknown) in July 2020.   I then lost two to Coccidiosis in 2021 before losing the remaining three in October 2021 to foxes.

In management terms it was a lamentably poor result.  I had never lost so many hens to disease before and the deaths due to foxes was the first in over ten years.  However the egg tally that I recorded was enough to indicate the overall egg production trend.

The actual egg tally over the three years.    Though keep in mind until July 2021 there were six hens laying, which dropped to just three hens in August of 2021, which is when I ended the tally. 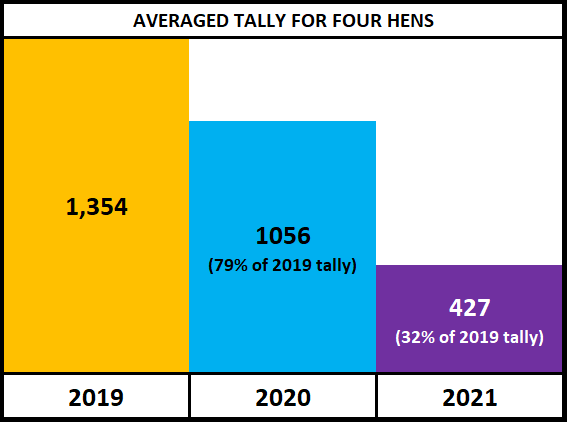 The tally averaged out for four hens.   The egg tally dropped by just 21% in the second year but then dropped by a considerable 68% in the third year.

However, these figures do seem to indicate that egg production holds well in the first two years but drops off steeply in the third year.

Had the Coccidiosis not taken its toll and the foxes not struck I would have taken the experiment to the end of the fourth year, which would have given a better overview of egg production decline.

It is also only a survey of a single crossbreed variety.  It would be interesting to repeat the experiment with a pure breed egg laying variety, such as Australorp.