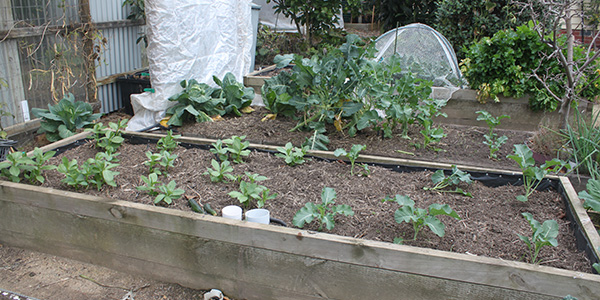 Season summary for my food garden in Ballarat (Victoria):  Autumn 2021

A colder than average March was cancelled out with a warmer than average May, resulting in an average maximum temperature for autumn. Though the minimum average temperature was -.6, probably due to the spate of frosts we had in late May.  Rainfall was down by 10% on average rainfall but given that it was a wet summer water was not an issue.   There were no major storm or rainfall events this autumn.

While a lot of summer crops finished early (probably due to March being cool) overall summer crop production was good.  Tomatoes were surprisingly good, so were cucumbers, eggplants, and capsicums.  Details can be found on my 2021-06 SEASON SUMMARY PDF below.
I had a big success and a big failure this autumn.

BIG SUCCESS
My big success was with a new pumpkin that I trialled.  I was looking for a pumpkin with a longer storage life.  I had settled on Whangaparoa Crown from New Zealand but being unable to get hold of any seeds I settled for Yates’ F1 Grey pumpkin, which from its description sounded  pretty close to Whangaparoa Crown, medium sized smooth light grey pumpkin that stores well.  While I do not yet know how long it will keep (hopefully to October) its other attributes are astounding.  Yield was exceptionally good, 16 pumpkins from four plants and the skin was indeed thin, making it easy to cut up.  Though the average size of the pumpkins were smaller than Jarrahdale or Queensland Blue I found this a positive as I find these pumpkins to be too big to eat before they begin to go off.

But what was really astounding was that it came in incredibly early.  Normally I start harvesting Golden Nugget (summer squash) around the end of January then move onto butternut in mid-March before starting on the large pumpkins (Jarrahdale or Queensland Blue etc.) in late April. The old gardening adage being that these large pumpkins are not mature enough to harvest until the first frost hits.  But the Gray pumpkins were ready to harvest about the same time as the butternuts.  Admittedly this might be due to the cold start to Autumn this year (which might have started the ripening off process early).  But if it comes in early during a normal Autumn season, well it just might rewrite my pumpkin harvesting management manual.  And if the stored pumpkins hold their quality into late spring Yates Grey will become my new go to main pumpkin for the foreseeable future.

BIG FAILURE
The big failure this autumn was to plant a whole lot of broccoli seedlings grown from home grown saved broccoli seeds.  Saving seeds from brassicas plants is always a risk because they easily cross pollinate, but I have had success in the past saving Tatsoi and Mizuna seeds (both are from the brassicas family) and I thought I would give broccoli a go.

Alas the seeds I saved had clearly crossed with another brassica variety, the heads that grew were tiny and the leaves were a very odd shape.  It was a reasonable gamble, if it had worked I would have had home-grown broccoli seeds to plant for the next three years.  My big failure was to plant so many of these home grown seedlings.  In doing so I broke a cardinal rule in food gardening, “always hedge your bets!” 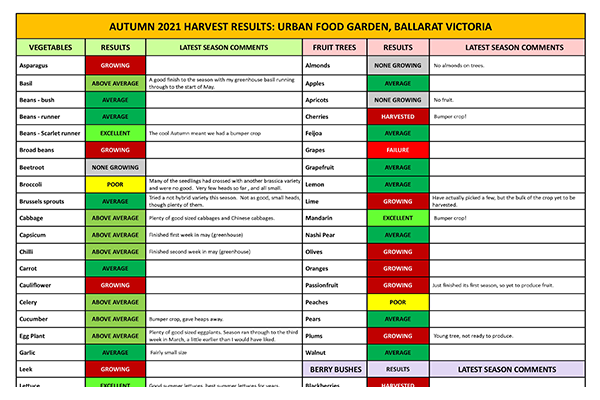 Chart of what was produced in my food garden this Spring and how well it went.  Click HERE to see a .PDF of this harvest results chart.  Note that this is probably too specific to interest most gardeners, I produce it primarily as a record for myself.  Keeping a record of when things were planted and how they went is a useful garden management tool. 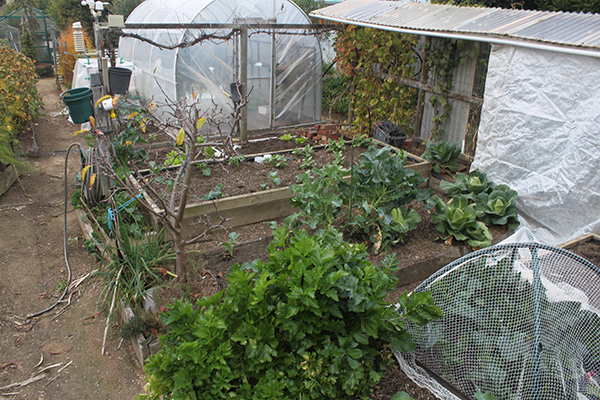 My main vegetable patch, photographed on the 20th May.  In the foreground is celery, spinach (covered with bird netting).  The rest of the garden is mainly taken up with brassicas, some newly emerging broad beans and the last of the Autumn planted lettuces. 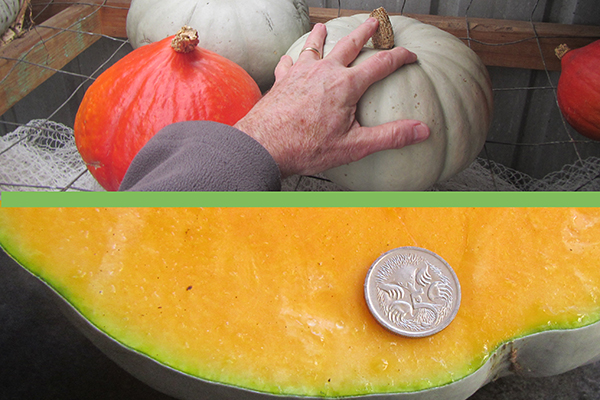 My big success this Autumn was Yates Grey F1 pumpkin.  Prolific, good tasting, thin skinned (easier to cut up) and very early.  TOP PHOTO: Showing the average size of a Yates Grey pumpkin, smaller than Jarrahdale or Queensland Blue pumpkins but still of a good size.  The Orange pumpkin is Red Kuri, nice pumpkin but not nearly as productive. BOTTOM:  Detail showing how thin skinned it is, making it almost as easy to cut up as a butternut pumpkin. 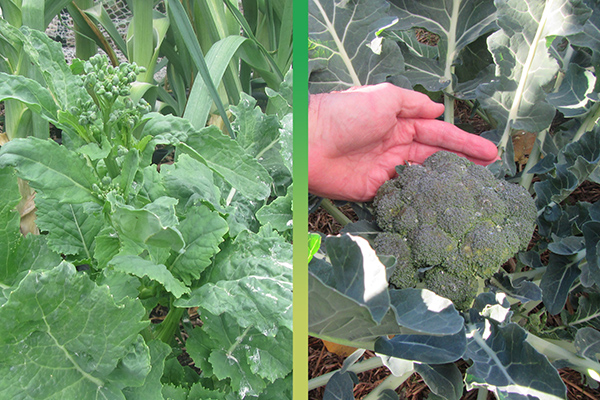 My big failure was my late Autumn broccoli crop, the worst in years.  This was due to the home-grown broccoli seeds I saved last year having crossed with another brassicas variety.  LEFT:  Most broccoli plants that were planted in early Autumn turned out like this, tiny heads, and funny shaped leaves.  RIGHT: Broccoli head grown back in 2018, what a broccoli head should look like! 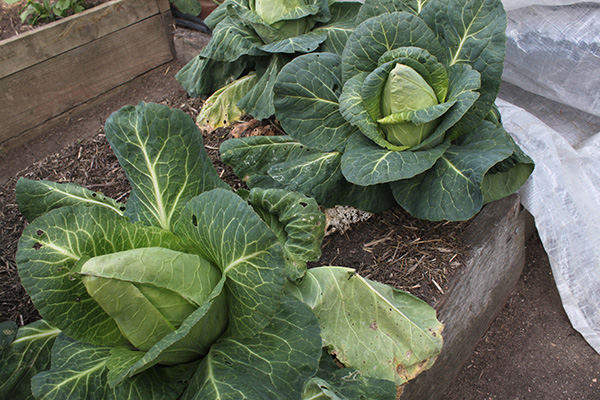 While late Autumn broccoli crop was poor I grew plenty of good cabbages, so there will still be an abundance of green vegetables to eat this winter. 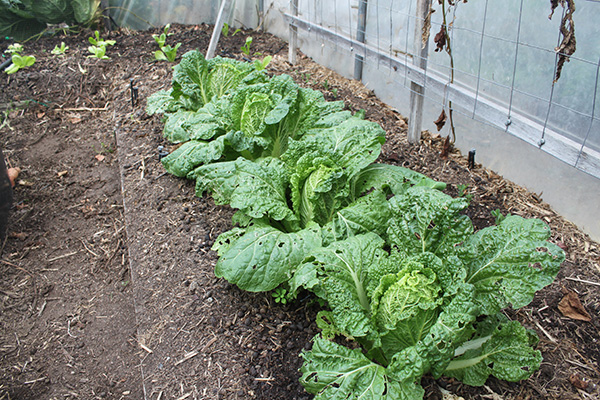 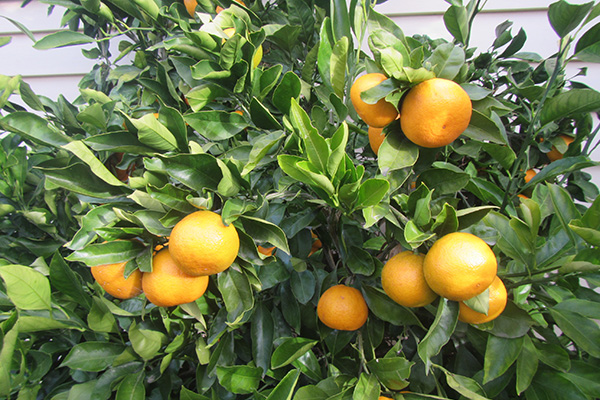 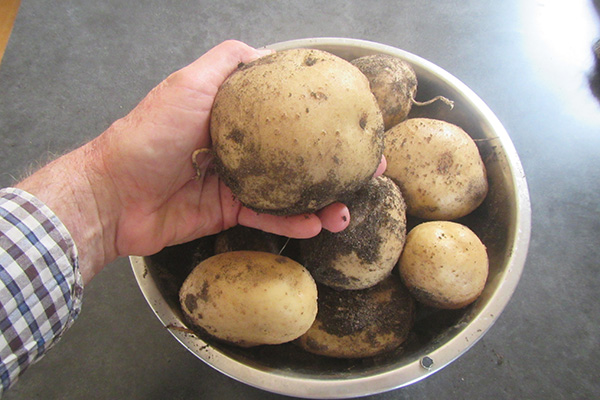 Started harvesting potatoes in the first week of March, probably won’t be finished for another six weeks.  It was a much better harvest than last year.  Last year I grew Pontiacs while this year I went back to Sebagos, a high yielding and very versatile potato.  It is also more resistant to powdery scab, which is endemic in my soil.  You can see the tiny powder scab welts on the potato I am holding.  Though powdery scab can reduce overall yield the welts themselves are largely cosmetic.