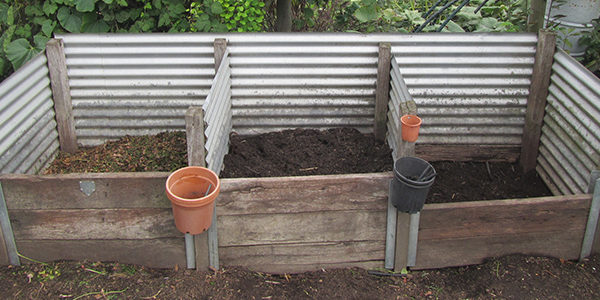 Where To Place Compost Bins

The same basic principles outlined in the GARDEN ZONES Section also apply to picking the best site for your compost bins.  However, as well as considering distance from your back door, you should also be mindful of the distance to the main vegetable patch as it is usually the main generator of green waste.  Carting this material even a few short metres to your compost bins will add a lot of extra work over a year.
If you don’t have chickens I recommend that your bins be placed  next to your main vegetable patch, though if you are applying GARDEN ZONES principles they should also be reasonably close to your back door.

But if you do keep chickens consider placing your compost bins in the chicken run as the chickens will break down the green waste more quickly as they scratch it looking for food.  In doing this they will also pick out weed seeds and manure the green waste with their faeces.  The overall result will be a higher quality compost in a shorter period of time.  For more in formation visit PLACING COMPOST BINS IN A CHICKEN RUN 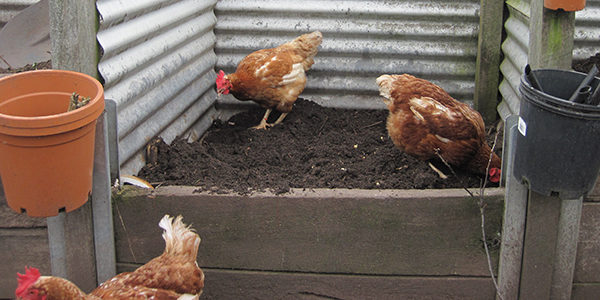 Placing your compost bins in the chicken run will improve the quality of the compost.

Small bins will dry out more quickly and are subject to greater temperature variations outside of the heat generated from the composting process.  This in turn discourages worms and can kill the beneficial microbes that break down organic matter, thereby slowing the whole composting process down and producing a poorer quality finished compost.
The minimum size for an effective compost bin is around 1m² (3.2 ft²) and having bigger bins then this only improves the quality of the finished compost.  However, there is an effective maximum size for any garden as if the bins are too large you may not have enough waste to fill them.

The process of composting involves filling a bin with all the available green waste until it is full to overflowing.  The bin is then left to stand for two to four months, with an occasional turn over with a garden fork.  By then the green waste would have broken down into a friable material not unlike coarse soil, which is ready to spread on your garden.

In order to give a compost bin enough time to fully break down the organic matter you will need at least two and preferably three compost bins.  Whilst one is being filled the other one or two bins are in various stages of breaking down their organic matter or being emptied in preparation to be filled up again.

If your garden only generates a small amount of green waste, then you are better off with two bins of at least 1m2 in size rather than three smaller bins.  With two large bins by the time one bin is full the other been should be ready to empty.