SEASONAL BLOG – Added Protection Against Foxes For My Chickens 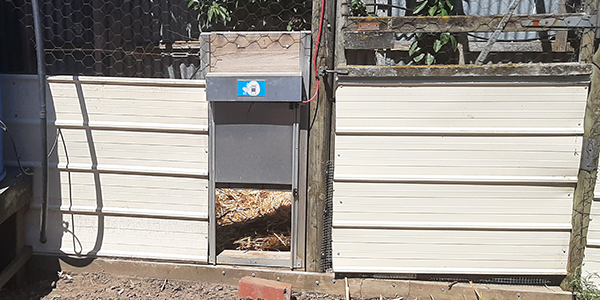 After losing my chickens to foxes back in November (2021) I set out to beef up my chicken run security.  This is what I ended up doing.

While the chicken wire I original used to build part of the perimeter fence was of good quality, over the twenty five years since I built the run it had rusted to a point that a fox was able to chew a big enough hole in it to get through.

My initial response was to simply replace the old chicken wire with new wire.  But one reader suggested that the run should have a low wall around it so foxes could not actually see the chickens in the run, apparently this was a tip given to her from an experienced poultry breeder.  The theory being that if the foxes can see the chickens just inside the fence then it spurs them to greater efforts to get in.  Of course the foxes can still smell the chickens, but I think this theory has some merit, and as I had some spare used Colorbond roofing steel I thought I would make use of it and replace the lower section of the chicken wire fence with steel.

STRENGTHENING THE BELOW GROUND DEFENCES

Foxes have been known to dig under fences.  Some fifteen years ago, to counter this threat, I buried 75 cm strips (roughly) of wire mesh under the ground outside the fence.  The theory being that foxes will start to dig at the base of the fence but will not be able to get far due to the mesh below, and they haven’t got the smarts to scratch around to find the edge of the mesh and dig under it.

As part of my protection upgrade I inspected the mesh at a couple of places.  Most of the mesh I laid was tougher weld mesh but some of it is chicken wire, though even the chicken wire seemed still to be intact.  But as an added precaution I lined the base of the external fence (except for the neighbour’s side which I can’t access) with loose bricks.  The theory being that if a fox starts to dig under the fence the bricks will fall into the emerging hole.

But note that I have never seen any evidence of foxes attempting to dig under the fence, which I put down to living in a urban setting.  Due to the close proximity of so many humans and their dogs I doubt that a fox would want to hang around long enough to be able to dig a hole .

The top of the deep litter pen is completely covered with 100 mm weld mesh. This is because foxes are good climbers and can easily climb over quite high fences.

I checked this mesh cover and put in extra screws where the wire was lifting a bit.  But overall, it is till in pretty good condition.

DISINFECTED AND CLEANED THE HEN HOUSE

In the years my chickens been infested with spider mites, lice and (possibly) intestinal worms, though not for many years.  In more recent times there has been an outbreak of Coccidiosis (bacteria that causes diarrhea).  While all these maladies can be treated on the spot fallowing a chicken run occasionally is a really good idea.  Spider mites and lice cannot live for more than a few days without their chicken hosts, so simply leaving the run empty for a while will kill off these parasites.

To reduce the possibility of the new chickens getting Coccidiosis I disinfected and thoroughly cleaned the hen house.  I also removed a layer of soil on the henhouse floor and replaced it with gravel.  Hopefully this cleanup and the time that the run has been left empty (several weeks) will be enough to remove all traces of the Coccidiosis bacteria.

The Colorbond roofing steel that I used to replace the lower section of the chicken wire fence. 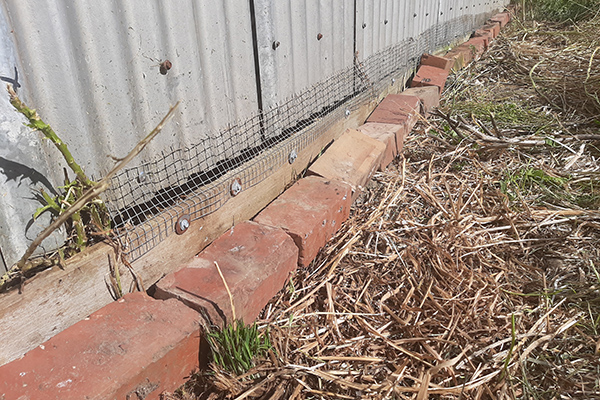 The loose bricks that I used to add extra protection for the external fence. 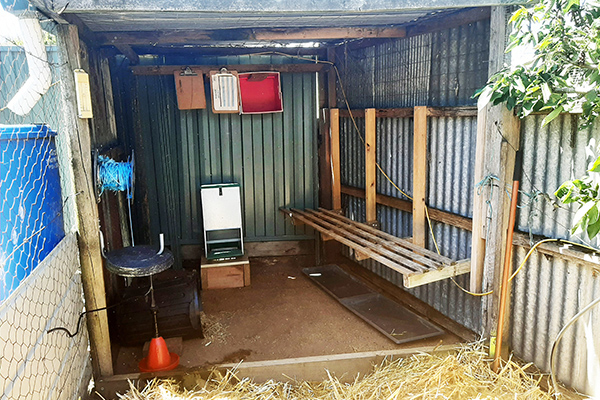 The chicken coup all cleaned up in readiness for the new hens. 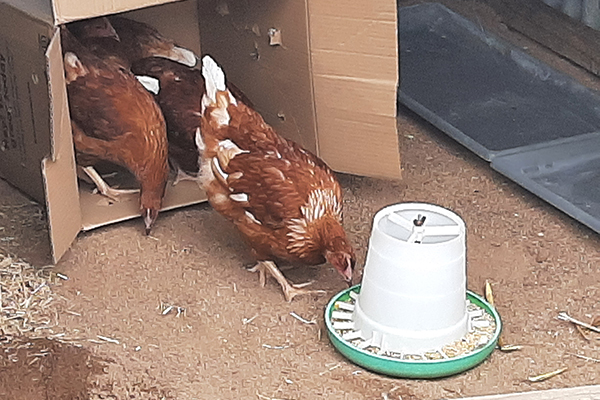 Releasing the new hens.  They are Hyline Browns