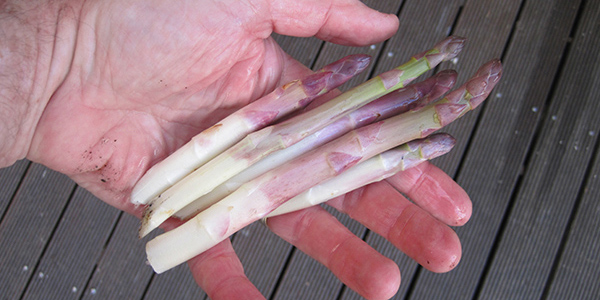 Following up from my Early Start To The Asparagus Season blog post back on 11th August.

It has indeed turned out to be an early start to the asparagus season.  I harvested my first asparagus spears today (Ballarat, Victoria), which is a good two weeks earlier than usual.  It is in fact the earliest that I have ever started harvesting asparagus. Though only a few spears so far, normally the harvest doesn’t get into full swing until about the second or third week of September.

While this early start is unusual, what is perplexing to me is that, while being slightly above the average maximum winter temperature thus far (June & July came in at .6 deg above the long term average maximum temperature) we have had warmer winters in the past where the asparagus season started later than this.  Even more perplexing is that the average minimum temperature thus far has been .6 of a degree below average.  By all accounts (at least by my reckoning) the asparagus season should not have begun this early.

But as I have often said; “the more I garden, the less I realise I know about gardening”!