I harvested my main pumpkin crop on the weekend (2nd May 2020), the last to be harvested of the three pumpkin varieties that I grow.  The varieties I am currently growing are: –

GOLDEN NUGGET
Also known as a bush pumpkin.  The leaves and growth pattern more closely resemble that of a zucchini plant but the compact size pumpkins (600 to 900 grams) it produces are useful for two reasons.

Firstly, it is the earliest pumpkin to produce a crop, here in Ballarat (Australia) I usually get the first harvestable Golden Nugget pumpkins by around mid to late January.  The second reason is that it stores incredibly well, being the longest lasting of all my pumpkins, in a good season (if they haven’t already been eaten) they can be stored right up to the end of November.

This season the crop was good. I didn’t count how many we got, but it was around fourteen pumpkins from two plants.

WALTHAM BUTTERNUT
Probably my favourite pumpkin due to its great taste and thin skin, which makes it easy to cut up.  They are the second earliest of my pumpkins to harvest, usually being ready by Mid -March.  The downside of Butternut pumpkins is that they don’t store that well.  What I normally do is start harvesting the Golden Nuggets in January but as soon as the Butternuts come on in March, I switch to them to make sure they are eaten before they go off.  Any uneaten Golden Nuggets are left until the very end of the pumpkin season as they are the best keepers of the three pumpkin varieties I grow.

Unfortunately, this year was a poor season for Butternuts.  We only got three pumpkins from two plants, probably due to me planting them in a poor position, the space was too small and the plants were overshadowed by other vegetables as the season progressed.

JARRAHDALE
I think it doesn’t have as good a flavour or keep as well as some of the other large pumpkins (like Queensland Blue) but while I have experimented with a number of different pumpkin varieties over the years I have always come back to growing Jarrahdales.  For starters it yields extremely well.  This season I got fifteen pumpkins from four plants, a ratio of 3.75 pumpkins per plant.   But it is also extremely reliable, consistently producing a good crop year after year, it’s no surprise I have nicknamed it “Old Faithful”.

Jarrahdale is what is called a true pumpkin, Golden Nugget and Waltham Butternut are considered a squash rather than a pumpkin.  While squashes can be harvested as soon as they are ripe for the best flavour pumpkins are best left on the vine until the Autumn weather sets in.  Traditionally they are harvested when the first frost hits, but I prefer to harvest before then.  A heavy frost can damage a pumpkin by freezing its skin, damaged pumpkins won’t keep as long.

By growing these three varieties, Golden Nugget, Waltham Butternut and Jarrahdale we have home grown pumpkins available to eat from mid-January right through to the end of November, about nine months of the year. 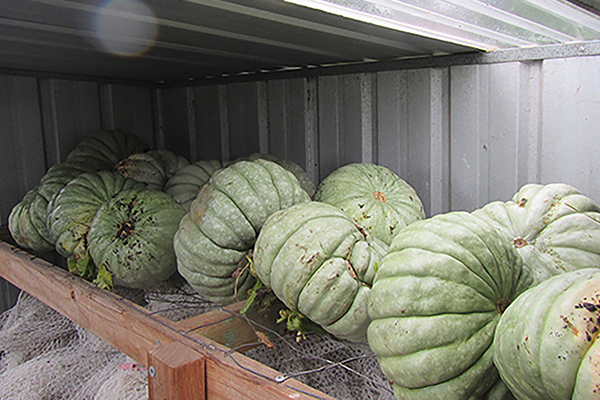 My Jarrahdale pumpkins from this season’s harvest (May, 2020). Four plants produced fifteen pumpkins, a ratio of 3.75 pumpkins per plant. I store them in an old aviary as this keeps the pumpkins dry and well ventilated. 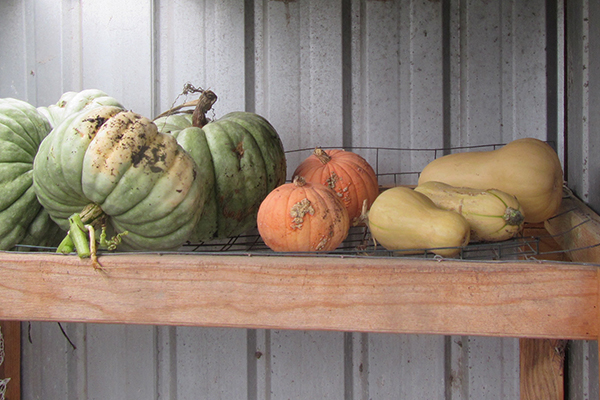 The three Waltham Butternut pumpkins that I harvested on the right and the last of the Golden Nugget pumpkins along side some of the Jarrahdale pumpkins on the left. 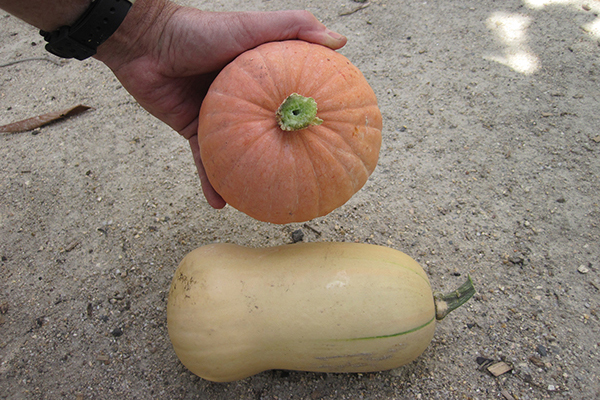