If you grow a single chilli plant far enough away (beyond bee flight range) from any other plants of the genus capsicum it would still produce fertile fruit, however a single plant grown in that same location which relies solely on cross pollination, such as pumpkin, would not produce fruit. But if you plant capsicums and chilli plants close together then eventually they will cross pollinate with each other. You can tell when cross pollination has happened when the fruit of the plant grows uncharacteristically (forms a different shape and flavour).

This season my chilli plants showed clear signs that cross pollination with capsicum plants had occurred at some stage as some fruit became stubbier and rounder with a milder flavour. I say “at some stage” as when cross pollination occurs it does not change the flavour and shape of the fruit for that season, but what it does mean is that the seed saved from that fruit will take on at least some of the characteristics of the male pollen when planted in the following year. The cross pollination occurred last season at the very earliest, though I believe it is not an on/off switch but a gradual process, so cross pollination could have occurred on more than one occasion. *

But whenever the cross pollination/s happened clearly my chillies have diverged enough from true to type for me to buy replacement seeds next year.
Given this cross pollination should I continue to save chilli seeds in the future?
Yes, I bought the original chilli seeds back in 2010, so I have had nine years of using my own chilli seeds.

* Clearly, I am not a botanist, if there are any botanists out there who can shed light on exactly how the cross-pollination process occurs I would be very grateful 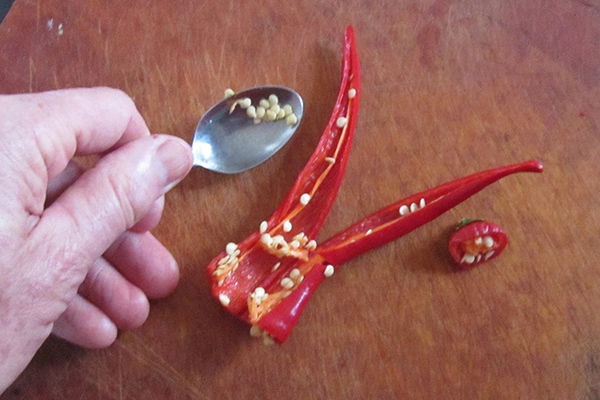 Saving your own chilli seeds is easy, simply cut a ripe chilli in half and scoop out the seeds with a teaspoon then place the seeds in a paper bag for a couple of weeks to dry out before storing and labeling them. 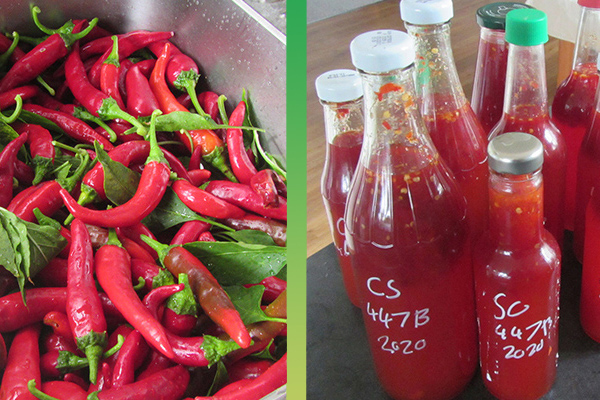 The cross pollination didn’t in any way spoil the crop. We still got plenty of chillies to dry for chilli powder and to make sweet chilli sauce, it’s just that both the powder and the sauce will be a little milder this year.